The project for the new Telecom headquarters, in the Eur Business District, has to be framed within an indefinite social environment, made of expectations, criticisms, but also hopes.
The Eur district that is a landmark as a monumental urban “unicum”, requires a design approach based on preservation and enhancement.

The goal is to carry out a cultural integration with the Eur district, inspired by the urban monumentality that is recognized in the whole urban context, aiming to be an architecture characterized by the local and regional spirit, according to the best tradition of the Italian bioclimatic practice. The goal is to develop a building that responds to climatic conditions with the “genius loci” philosophy. Moreover the office complex shall project itself into the future with a spirit of regeneration, restoration and modernization, according to Telecom Italia Company corporate image.

The project, shorlisted for the second stage of the competition, aims to represent the corporate mission through its functionality and architectural symbolism.
The proposal re-configurates the idea of the Architect Ligini, the former designer, to generate a unique large scale monumental complex; It foresees the rehabilitation and enhancement of the original travertine podium on which the glass towers were erected.

The low-rise and massive stone buildings of the podium are linked with the surrounding environment throught several triple heights patios located in the institutional buildings, while the towers are placed as evanescent transparent prisms, connected to our time, aiming to re-shape the “skyline” of the city from “the south gate”.

Facades and the landscape are treated as individual elements, but linked by a dense network of linear connections that represent the communication, the rapid interchange, the rapidity of diffusion.
The same theme of “network” assumes a technological value making the building “bioclimatic”; as in the suggestive “chiaroscuro” artistic technique the interlacing of lines in increasingly dense patterns creates shadows where the sun beats and lets light to pass through where needed.

The glass prisms towers are “shaded” with shaders which geometry changes according to the facade’s exposure. On each facade geometry of shaders is studied according to the calculation of the annual solar irradiation on surfaces, taking into account the projecting shadows of each building on another.

The basic strategy is to break down the building energy demand for the summer air conditioning and so producing a high energy savings for the client.
Anymore the insertion of a shading “pergola” along the main pederstian flows together with the climbing vegetation, allows to reduce the heat Island effect generated by the construction and therefore mitigating the external microclimate. Regarding the low-rise blocks a different strategy was used. The wall “inertia” in terms of energy was implemented and the facades retreated to have a higher level of shading over the glass elemnts of windows. The addition of glass “lightshelves” to capture the light and reflecting it inside ensures the daylight diffusion in the interior spaces; the mobile vertical shadings on the east and west facades contrast the low sun radiation during the early hours of the day and late afternoon.
There is a differentiation of the facades based on the orientation without affecting the formal component of the volume.

A series of technological and functional solutions – which include for instance the collection, reuse and low water consumption – are proposed to make the building highly sustainable and LEED certified.
An important design resource is planning of green areas and landscaping close to the working areas, both inside and outside, to increase the well-being of the users and the hygrothermal comfort of the indoor spaces. This includes the roof garden of the low-rise buildings, connected to the office towers by suspended walkways.

The idea is to provide working outdoors spaces always connected between them. The indoor work spaces are characterized by innovative solutions that ensure flexibility of use over the time. Various office’s typologies, both for individual and work groups, are supported by the common areas and facilties that enable the optimization of resources and reaffirm the attention to energy saving. 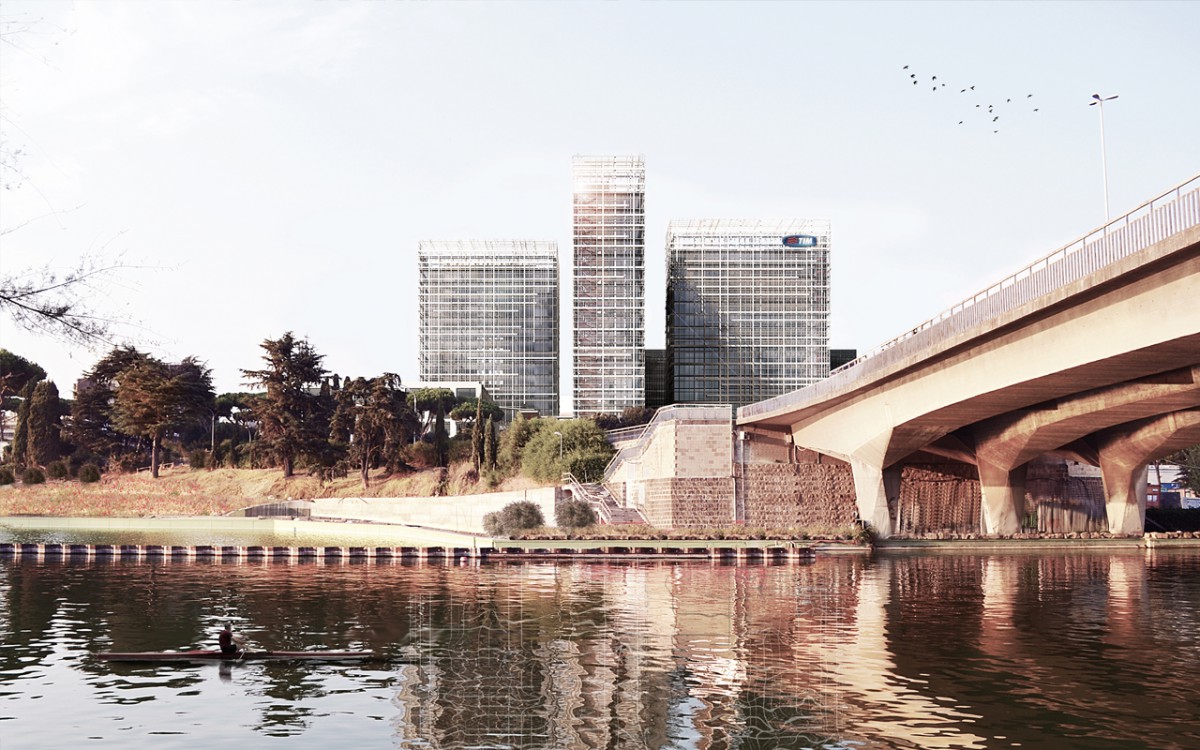 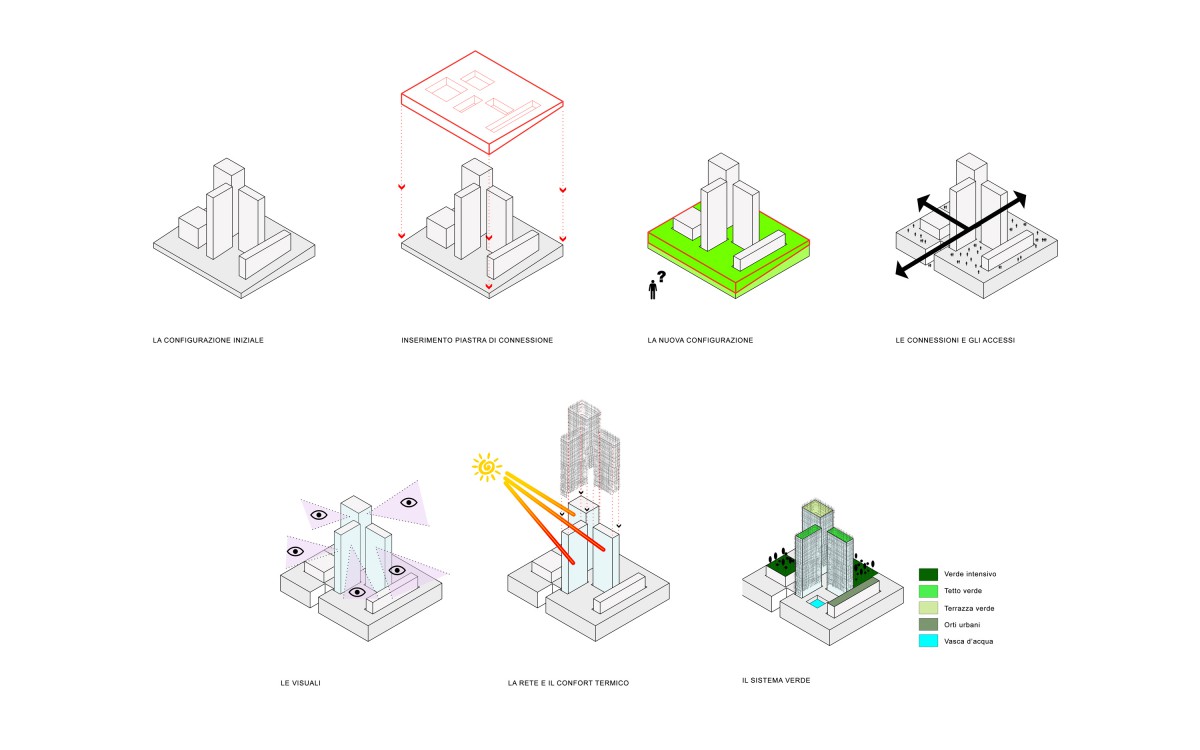 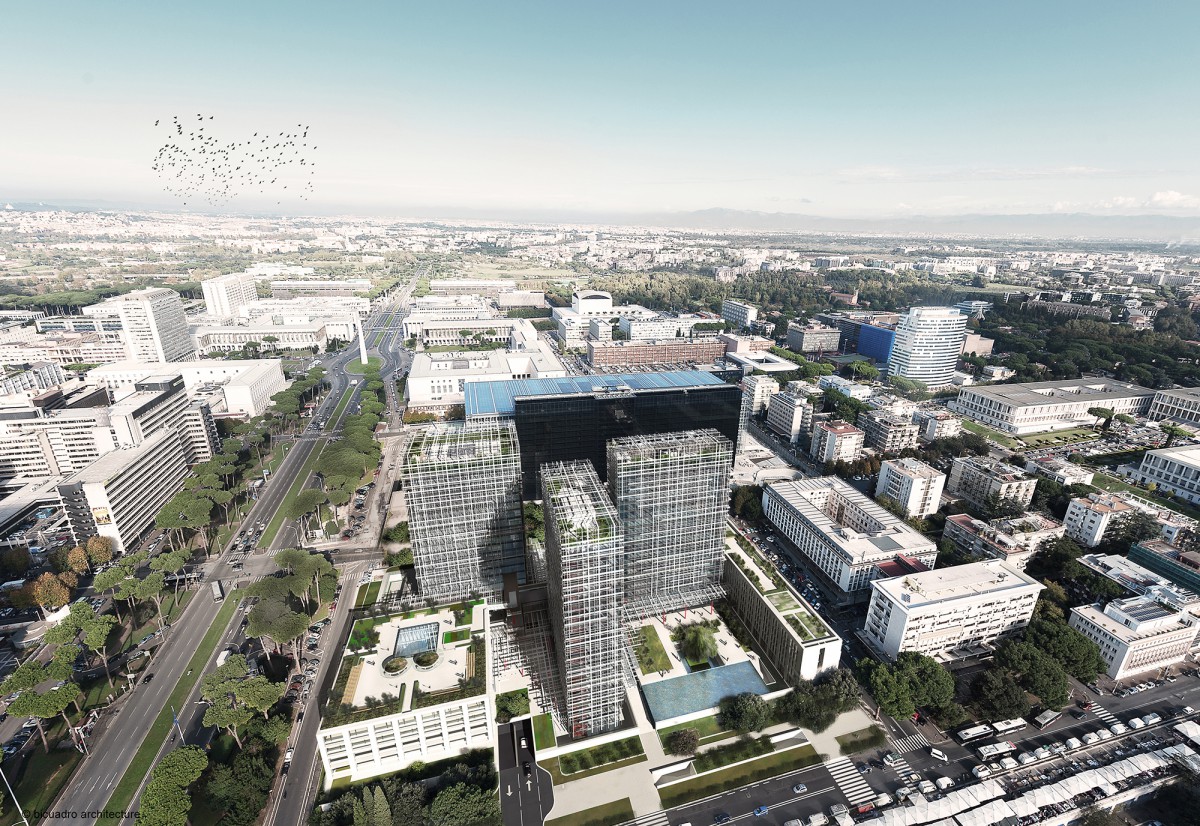 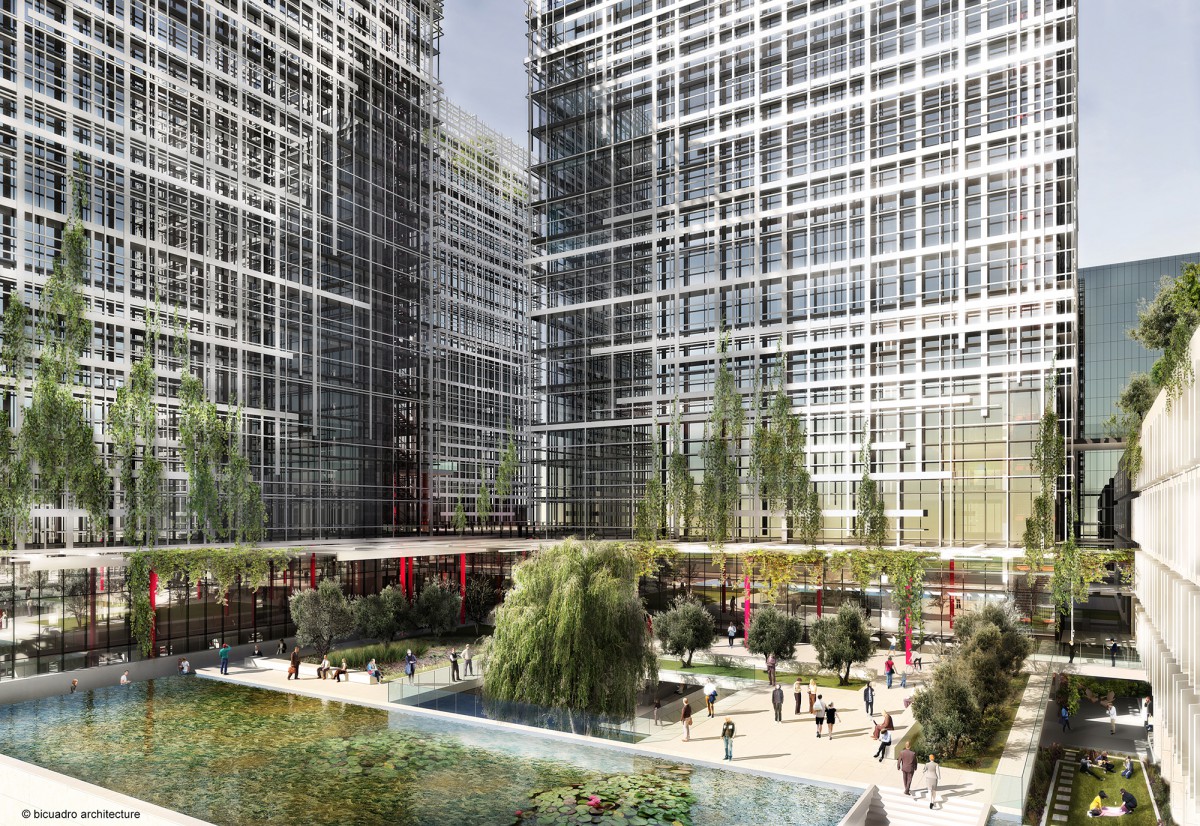 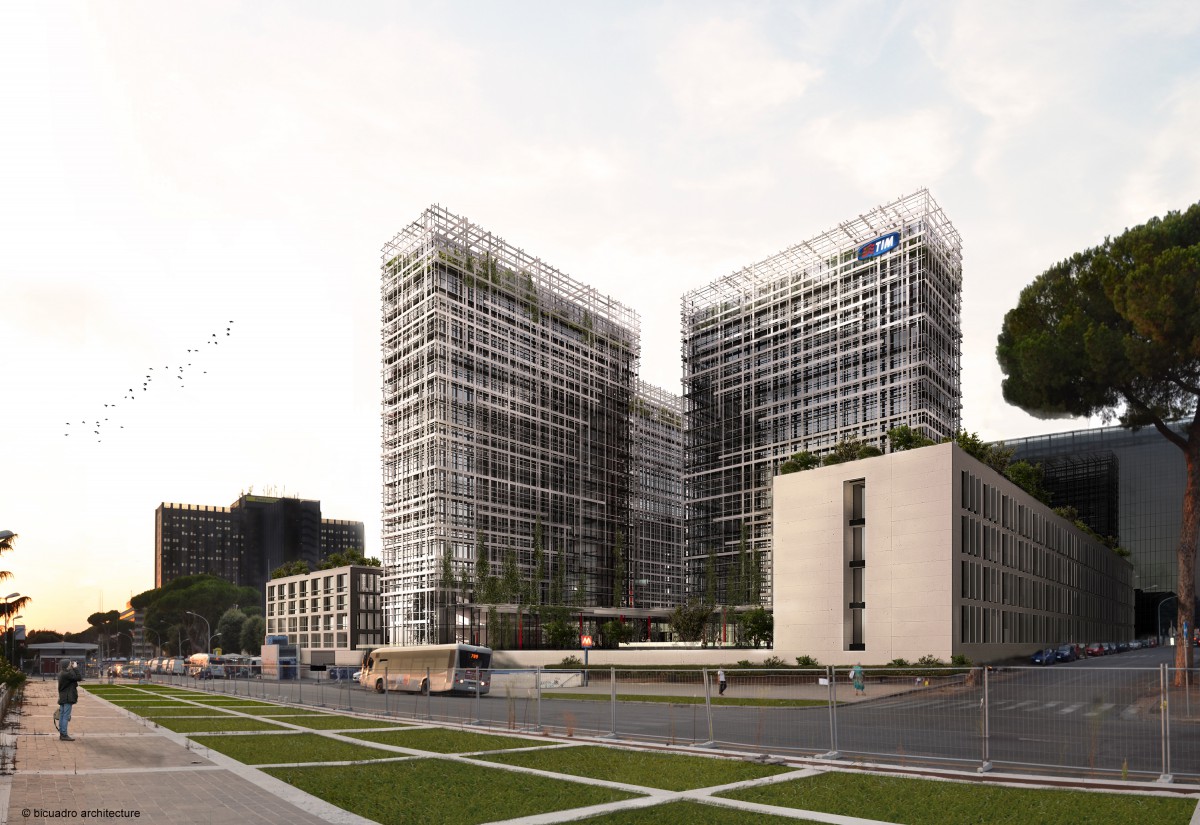 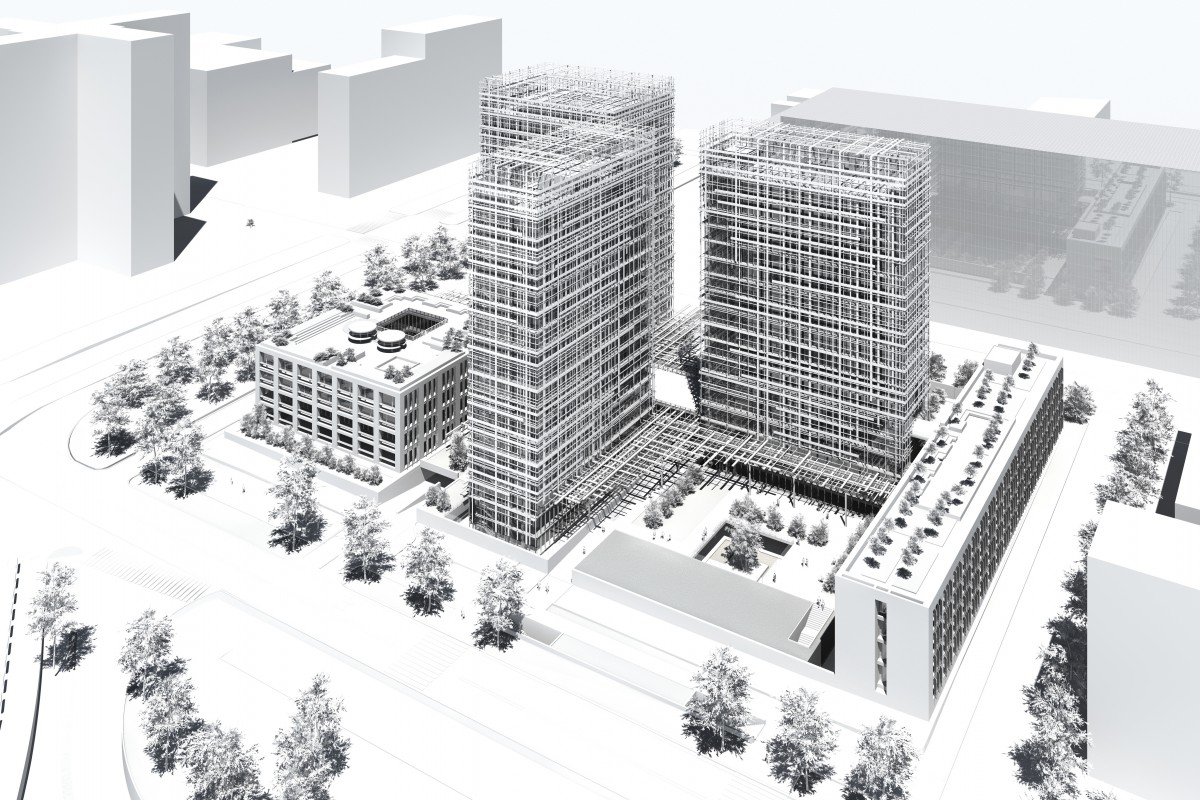 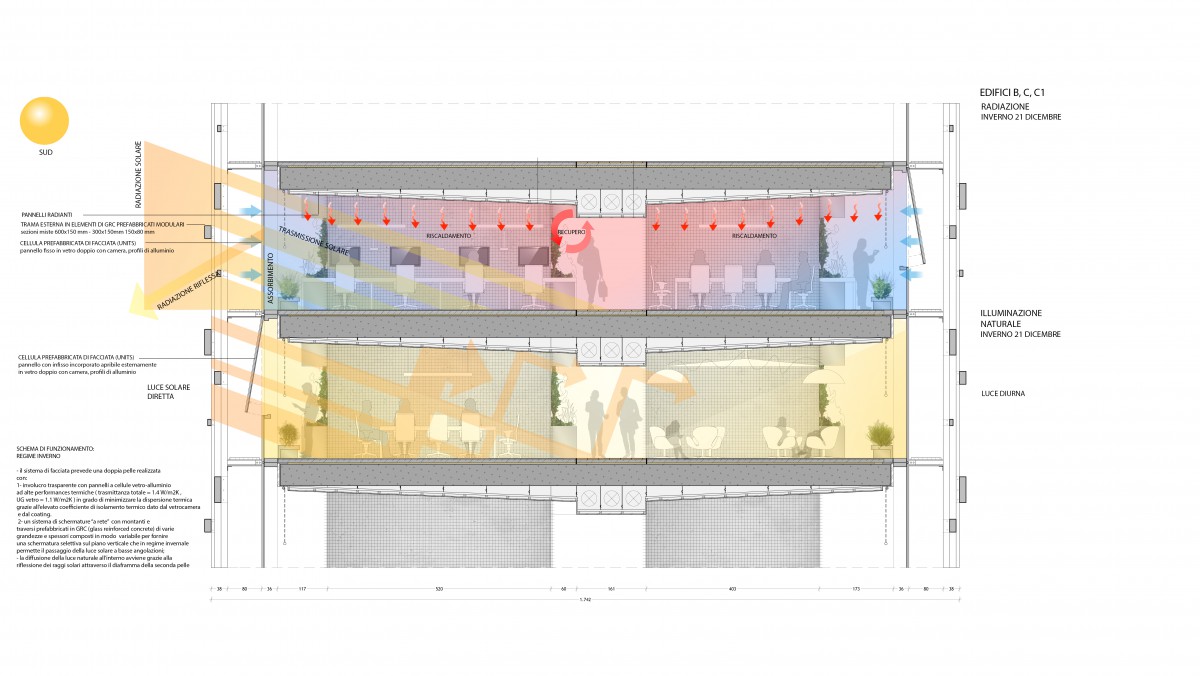 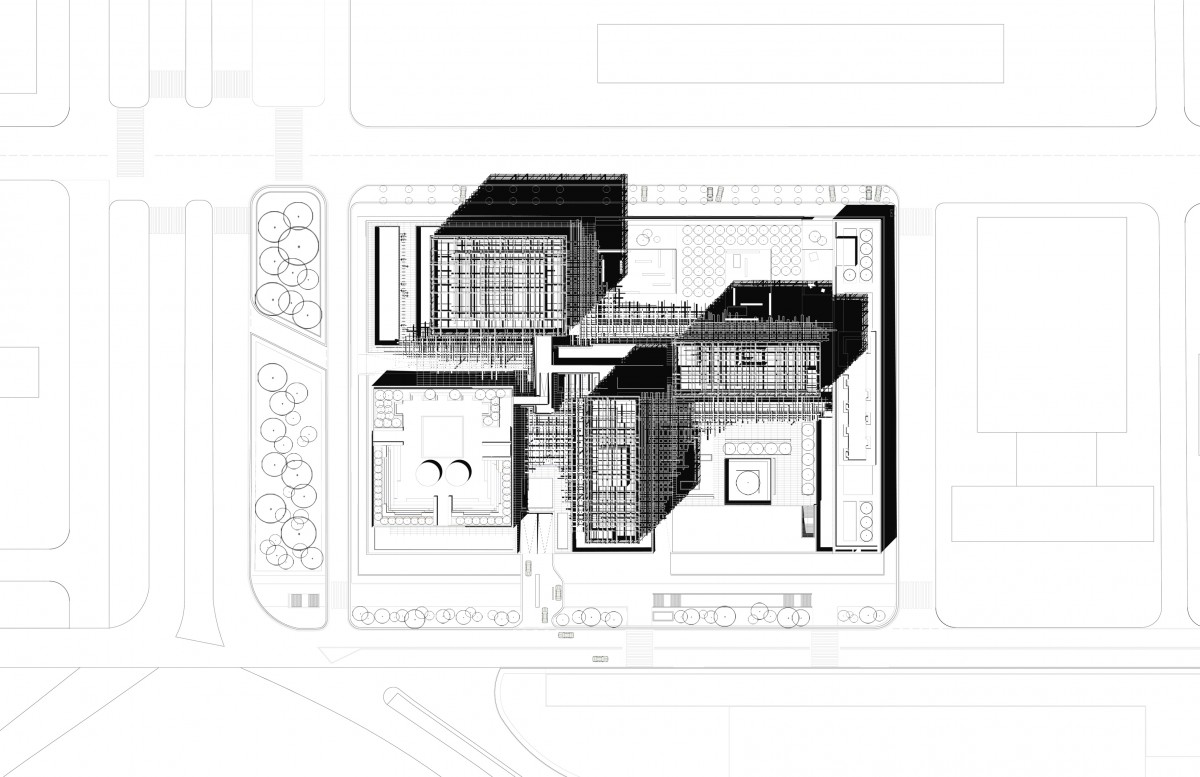 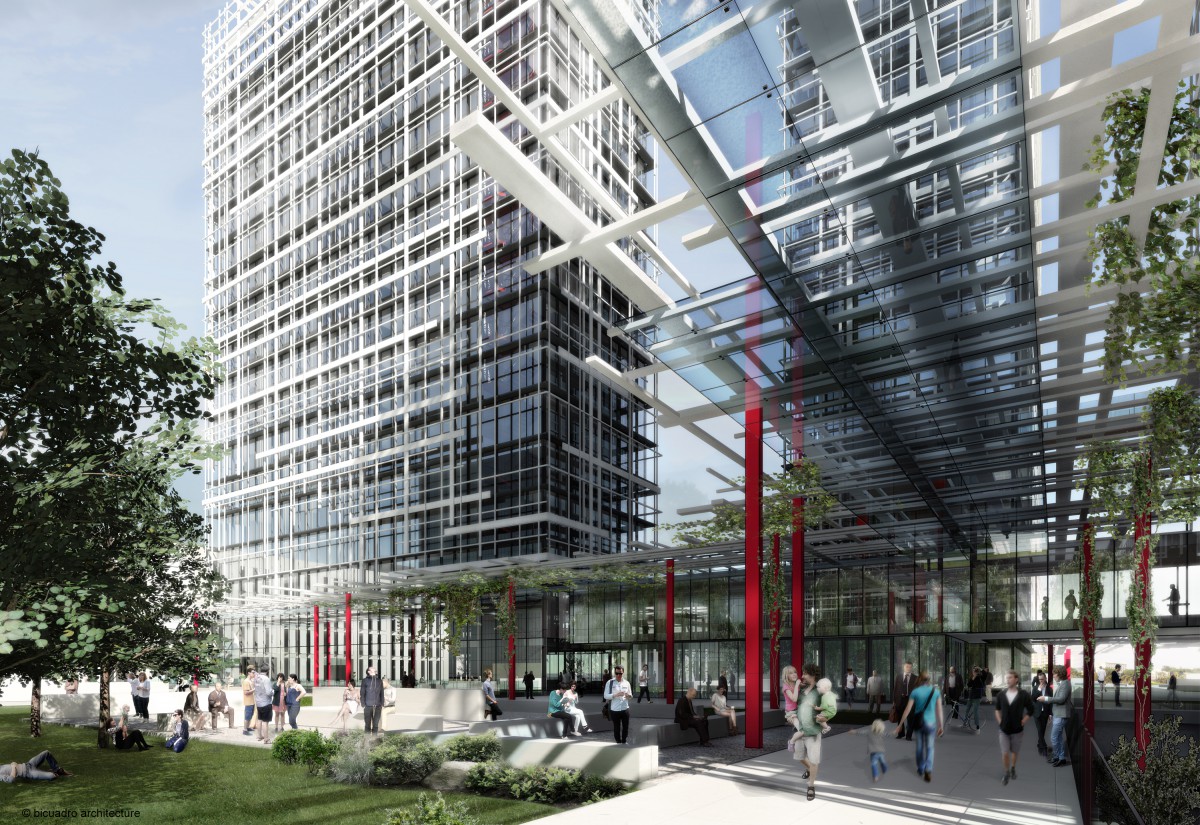 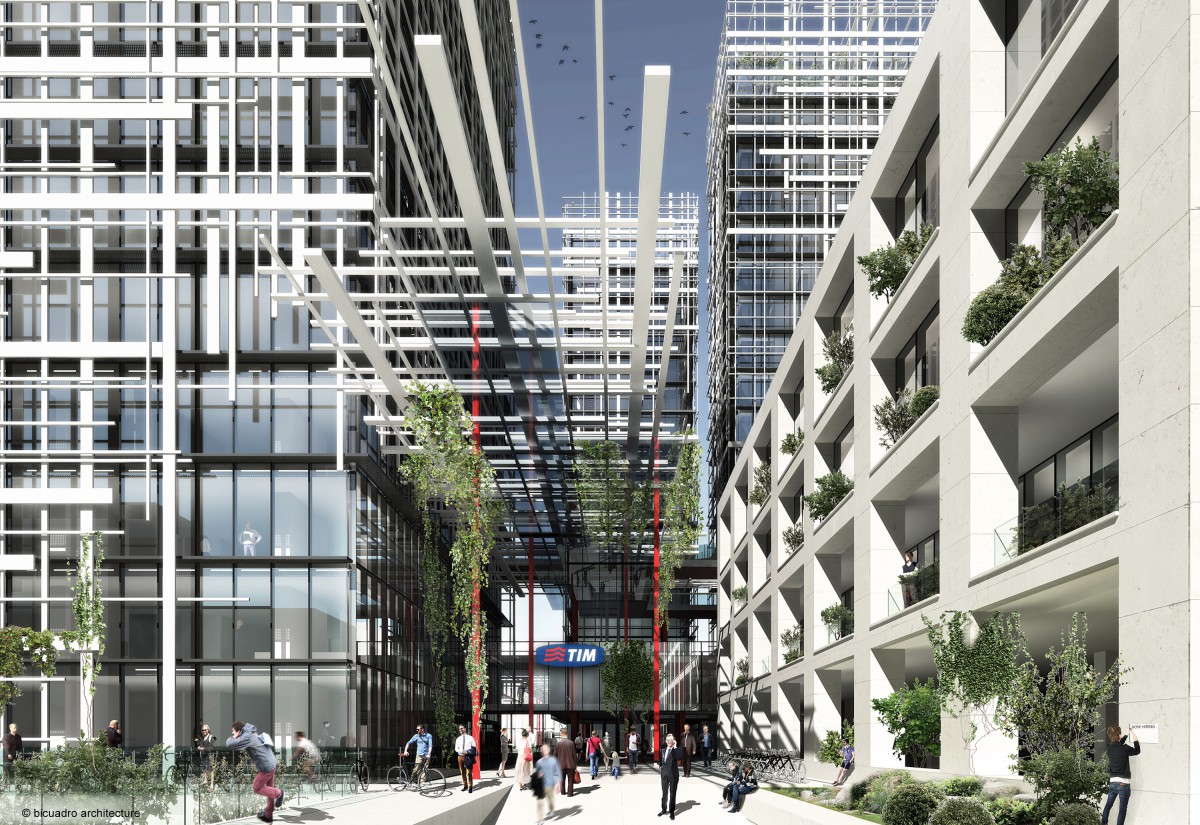